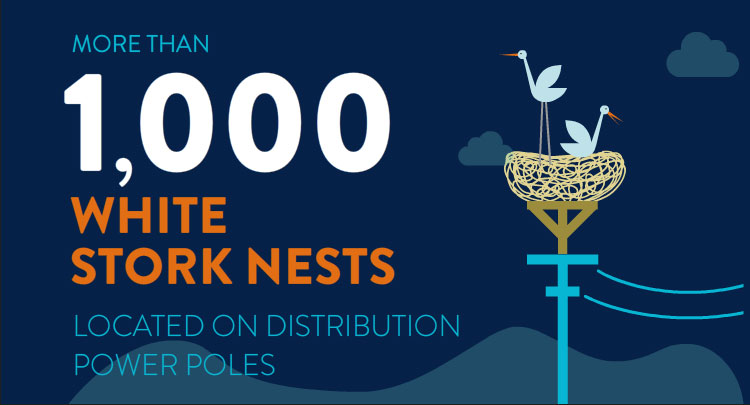 HEP's thermal power plants are located in urban or industrial areas and not within the Natura 2000 ecological network or areas protected at national level. Some protected areas are close to generating facilities, i.e. TE-TO Zagreb CHP is close to the significant landscape Savica or TE-TO Osijek CHP  is close to the border of the Mura-Drava Regional Park. A large number of HEP's hydro power plants are located within the Natura 2000 ecological network and some are wholly or partly located in protected areas such as national parks, nature parks, regional parks and areas of significant landscape. Also, just over 5,000 kilometers of medium voltage  overhead lines are located within the Natura 2000 bird conservation area, which accounts for about 20 percent of the total length of HEP ODS's  MV overhead lines.

During 2019, there were no pollution, construction or expansion of any plant, impacts on the spread of invasive species, pathogens or parasites, reduction in the number of indigenous species, changes in habitats, changes in natural processes and changes in groundwater salinity or level.

Reduction of negative impacts on biodiversity

The power grid, depending on its technical characteristics, can pose a threat to strictly protected bird species due to electrocution on hazardous elements (electric shock). Legal obligations to implement protection measures to reduce this threat have been recognized within the Natura 2000 area of conservation important for birds and cooperation has been established with the competent public institutions for protected areas and interested associations for the protection of birds.

The island of Cres has been recognized as a priority habitat for the implementation of measures to protect birds from electrocution, as the main habitat of the highly endangered and legally protected griffon vulture species. A field visit to the lines in 2019 determined a significant reduction in the threat thanks to the installed protective equipment at key points. Also, for the most critical section about five kilometers long (Srem-Plat-Verin branch), a long-term solution was applied using an insulated conductor and an underground cable. In 2019, over HRK 1.5 million were invested in measures to protect endangered bird species.

At the initiative of the representatives of the Lonjsko Polje Nature Park, an agreement was reached on the topic of protection of birds from electrocution within the park. In cooperation with Elektra Križ and Elektra Sisak, the protection of all potentially dangerous sections of the network within the nature park is planned. There have been 70 dangerous poles identified for protection, and the activities are expected to be completed by mid-2020.

The application for the LIFE Danube Free Sky project has been made, where HEP ODS, Elektroslavonija Osijek is one of the users in cooperation with the Kopački rit Nature Park. The concept of the project has been given the green light, and the result will be known in mid-2020. The project envisages the protection of all hazardous lines within the boundaries of the Kopački rit Nature Park by applying long-term solutions (insulated guide) and installing insulation equipment with funding from European Union funds.

Since 2014, when an artificial island was built on the Varaždin HPP reservoir, the BIOM Association has been maintaining the island without vegetation in order to preserve favorable conditions for nesting of common tern (Sterna hirundo). In the fall and early spring, before the terns return from places they spent their winter, the vegetation is mowed and removed from the island. The succession of islands and sandbanks severely degrades such habitats of crucial importance for these birds. As of September 2017, BIOM has been implementing this activity as part of the Interreg ČIGRA project - Conservation of Tern Populations in the Sava and the Drava River Basins, launched by the Institute for Ornithology of the Croatian Academy of Sciences and Arts, with partners from Croatia and Slovenia. The Association installed photo traps on the island to monitor tern nesting, as well as the presence of other birds and predators such as otters. Due to pronounced predation of otters on tern eggs and young terns, an electrical fence was erected as part of the Interreg Project to prevent the otters from coming to the island and make tern nesting more successful. Apart from conservation activities, the Association has organized and conducted a seven-day educational camp “Our Drava” for high school students from Varaždin County, which included a visit to the Čakovec HPP. The main themes of the camp were common terns, biodiversity and protection of the Drava River.

The project documentation for the Reconstruction of HPP Varaždin was prepared and reviewed, in which the technical solution of the new fish path was proposed. The proposed solution defines a new route and improvement of the fish path.
During the rehabilitation of the bridge over the drainage canal of HPP Varaždin, two thematically different info boards on ornithofauna and protected species living in the area of Drava power plants, i.e. in the area of the UNESCO transboundary biosphere reserve Mura-Drava-Danube as well as the Mura-Drava Regional Park and the area of the ecological network Natura 2000. Info boards were made in cooperation with Public Institution Priroda of Varaždin County and the City of Varaždin.

Contribution to the protection of white storks in Croatia

Through almost two decades of implementation of activities for the protection of white storks within the 14 distribution areas of HEP ODS, a real coexistence has developed between field workers and this strictly protected bird species. Although activities on the protection of storks nesting on electric poles are regulated by a voluntary agreement with the Ministry of Economy and Sustainable Development and 14 public institutions for protected area management, they have become an integral part of regular network maintenance activities and one of the recognizable symbols of the HEP Group. Thus, in 2019, at the level of HEP ODS, about 200 activities were carried out that contribute to the safe nesting of white storks, mostly related to the replacement or repair of nest holders, installation of protective equipment and technical assistance in ringing young storks. There are more than 1,000 stork nests on the pillars of HEP ODS, and a special decision of the competent ministry has been obtained for all activities