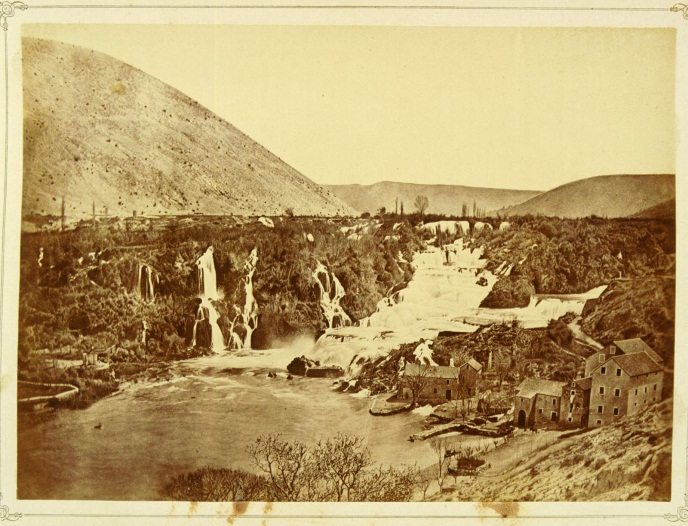 HPP Krka (later named Jaruga I) on the waterfalls of the Krka River was included in the list of historically important engineering breakthroughs in the world (IEE’s program Milestone) as the oldest AC hydro power plant in this region (it is only three days “younger” than the hydro power plant on the Niagara Falls) and is a component of one of the first energy systems in the world. In the times when big cities like London or Rome had single-phase systems, the town of Šibenik had the two-phase system Krka-Šibenik. That was the first integral energy system in the world, and one of the first systems of this kind in the world. Investors and constructors of this system were the mayor of Šibenik, Ante Šupuk, his son Marko Šupuk and the geodesist Luigi de Meichsner.

Everything started on 7 October 1892 when Meichsner requested from the city council of Šibenik a permit to build a new house on the Krka River, which he obtained on 2 December of the same year. In the following years Meichsner prepared schemes and projects for the construction of the first hydro power plant and the transmission line and town network for lighting. On 18 December 1893, after examinations and public discussions, Meichsner was awarded a concession to use the waters of the Krka River. Alongside with that Meichsner founded an association with Ante and Marko Šupuk, which started with its work on 1 June 1895, when the construction was in full swing. The system was commissioned on 28 August 1895. 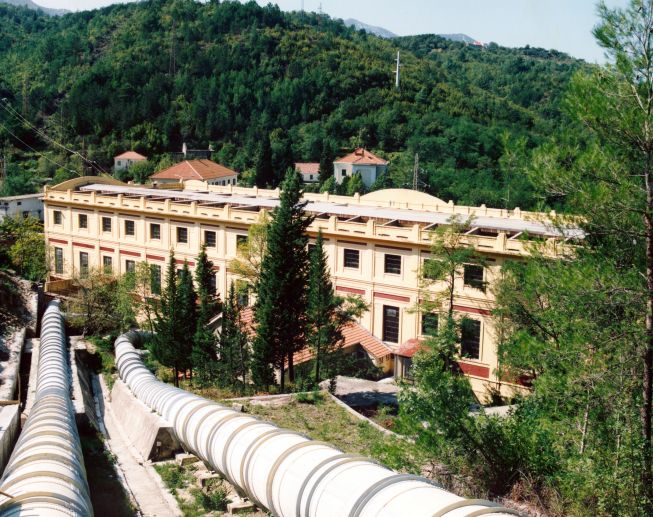 HPP Kraljevac built, at the time among the biggest in Europe

HPP Kraljevac was the first hydro power plant on the Cetina River, located 21 kilometers upstream from the estuary of the Cetina, near a place called Zadvarje in Split-Dalmatia County. It was commissioned on 19 March 1912. It was the biggest hydro power plant in south east Europe and one of the biggest in the whole Europe at that time and many years later, according to its installed power and generation.

The history of planning, designing and constructing hydro power plant Kraljevac shows the spirit of united Europe many years before the creation of the European Union. At the end of the 19th century, Austro-Hungarian Monarchy started researching the possibilities of using hydrological potential of the Cetina River, especially in its canyon, near Zadvarje. The German company “Schuckert&Co”, one of the precedents of today’s company Siemens, drew up the basic project for using a significant natural fall on the waterfall Gubavica in 1897, and the first real project was made by engineers Dešković & Wagner in 1899. In 1902, a Belgian expert Macquet dealt with five options of using water potential on a part of the Cetina River downstream from the place of Trilj and he suggested the most favorable option similar to today’s hydro power plant Zakučac.

Based on the project of Dešković & Wagner, the Austrian company “Wasserwerke” from Vienna got in 1904 a water right concession for using concentrated fall Gubavica. A detailed project for the construction of hydro power plant Kraljevica was made by a Swiss engineer in Geneva in 1906, and it was modified by the executive director of the company “Sufid”, E. Cairo. The company “Wasserwerke” sold in 1907 its management rights to the Italian company, “Sufid”, and the equipment was bought from a Hungarian producer “Ganz”.

In the first construction phase (1908 – 1912) led by the company “Sufid”, two aggregates were built with the total power of 25.6 MW. French company “La Dalmatienne”, founded in Paris, bought out all the assets of “Sufid” company in the second construction phase (1928 – 1932) and it built two more aggregates with the total power of 41.6 MW. At the end of the second construction phase HPP Kraljevac had four aggregates and its total installed power was 67.2 MW.
Even today, after one century of its work, HPP Kraljevac delivers precious kilowatt hours of certified green electricity into the Croatian energy system.

“Ante Šupuk and son” from Šibenik among the founders of UNIPEDE 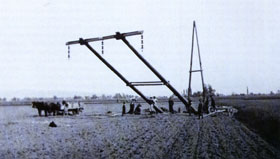 One of the most significant projects of the State Electrical Company was connecting with the Slovenian network by constructing a 40-kilometer long 110 KV transmission line from Brestanica (Reihenburg) to Rakitje (near Podsused), but under 30 kV voltage. The connection was the result of an idea by professionals from the Electrical Power Station in Zagreb.

The transmission line was built on wooden portal posts with 3x120 mm2 aluminum conductors, and it was connected to the northern system of three transmission lines: Electrical power station – Podsused. It was put into operation in 1943, and during World War II it was extended to the village of Sv. Klara under 80 kV voltage. 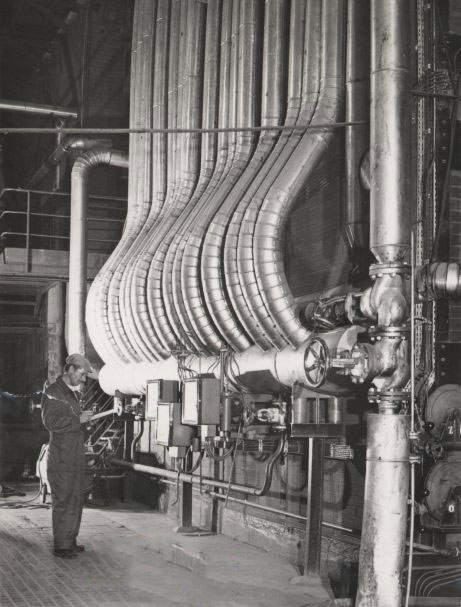 The beginning of district heating: hot-water pipeline for the needs of the company R. Končar from EL-TO Zagreb

The decision about heat energy supply of the company Končar from electric power station (today EL-TO Zagreb) was made in 1947. Fulfilling plans was late due to problems that the company Rade Končar had with prompt ensuring of imported equipment and a more significant role that the electric power station played in the energy system because the construction of new power plants was late.

After the construction of hot water pipeline was completed in 1950, for transport of hot water from the electric power station for the heating of the company, Rade Končar, a thermal station was built in the electric power station in 1954. In December 1954 district heat for the company Rade Končar was distributed, which marked the beginning of intensive development of district heating in Zagreb.

The Union of Electric Utilities of Croatia founded 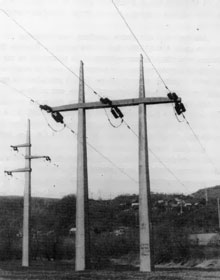 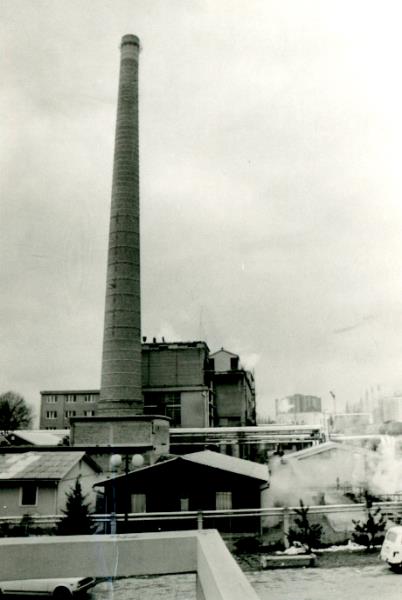 Many years of mining and geological research of Slavonija, Baranja and Srijem proved fruitful in 1968, when oil-gas field Beničanci was found and only gas field Bokšić-Lug in April 1973 enabled the revitalization of gas industry in Slavonija.

As early as in 1974 Elektroslavonija Osijek entered into the gasification of the region by building a power plant in Osijek with gas turbines. Since 1974 long-distance gas pipelines, metering and regulating stations, gas pipeline networks, distribution stations and gas odorizers have been built. Gas plants have been commissioned throughout the Podravina region of Slavonia. 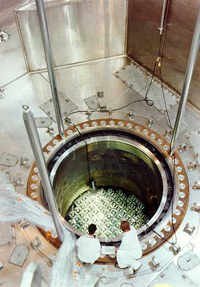 The first research in the karst field, when the area became a possible location for a nuclear power plant, was carried out by the working group of the Slovenian Business Association of Energy in the period between 1964 and 1969. The investors of nuclear power plant were Savske elektrane Ljubljana and Elektroprivreda Zagreb, which conducted preparation activities with the investment group, invited tenders and chose the best bidder.

In August 1974, the investors signed the agreement about the procurement of equipment and the construction of 632 MW nuclear power plant with the American company Westinghouse Electric Corporation, and the architect was the company Gilbert Associates Inc., whereas the constructors were domestic companies Gradis and Hidroelektra, the installation was carried out by Hidromontaža and Đuro Đaković.

On 1 December 1974 the cornerstone of Nuklearna elektrana Krško was laid. In January 1984 NEK obtained permission for regular work. 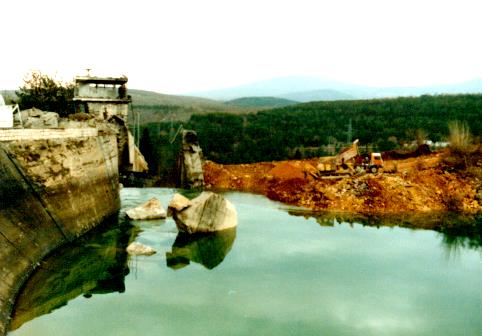 Rehabilitation and extension of the Peruća dam completed

War history of Peruća begins with the occupation of the dam and the engine room of HPP Peruća on 17 September 1991, after which the enemy closed the shutter on the basic nozzle, and raised the overflow shutter. This stopped the discharge of water from the accumulation used by downstream hydro power plants, so that the level of water at the end of December reached a critical level and endangered the dam. The overflow of clay core and dam crest threatened. During the negotiations with the enemy, on 1 January 1992 the overflow shutter was lowered by 90 cm, which reduced that risk to a point.
However, between 20 and 30 tonnes of explosives were left in the injection gallery and overflow part. In July 1992 UNPROFOR took over complete control and responsibility for the plant. Yet, despite the promises of international observers, in the afternoon of 27 January 1993, the occupants took over the object. On the next day, 28 January, UNPROFOR forces left the power plant, and the Croatian army managed to overpower the enemy, who activated the explosives during retreat.


On 28 January 1993 members of the Yugoslav army and rebel Serbs activated explosives in the control gallery of the Peruća dam. The dam partially broke, water permeated its inside and severely damaged it and threatened to completely damage and flood the whole downstream flow, to the town of Omiš. This was a unique example of a catastrophic war act and destruction scenario against the civilians. Fortunately, on the same day, HEP’s experts came to the dam and acted quickly and efficiently. New basic discharge was opened and the flow of water from the accumulation enabled. The catastrophe was avoided.
During 1993 aggregates were repaired and put into operation. Because of severe damage of the dam during 1993 and 1994 the level of accumulation was very low (330 m. a. s. l.) Aggregates worked with minimum power of 1.8 MW, i.e. below the technical minimum. The rehabilitation of the dam started in August 1993. The rehabilitation was approved with plastic concrete diaphragm in the central part of the dam (in the clay core) by exchanging the material in the side and upper parts of the dam. The dam was higher by 1.5 meters, which increased the volume of accumulations by 33 million m3. The renovation was completed in 1995. After that first phase, in which the dam was principally repaired, started the exchange and renovation of energy equipment, which had been in a bad condition. 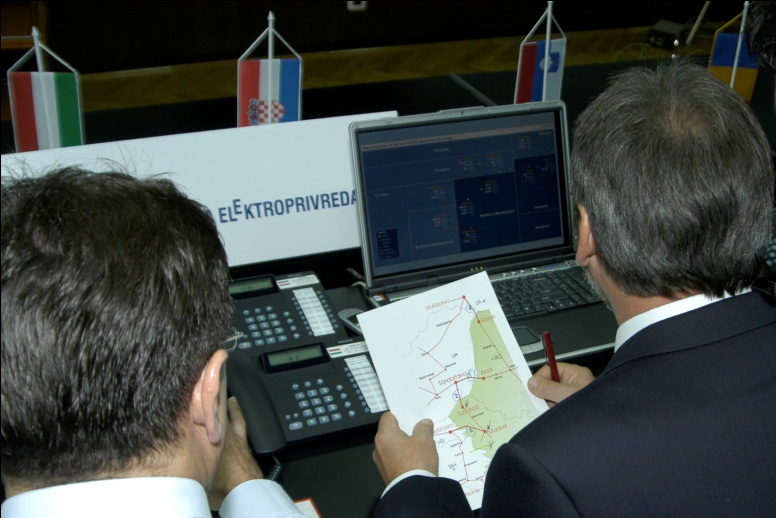 Because of war damages the most important 400 kV substations and transmission lines in Croatia (SS Ernestinovo and SS Konjsko) and Bosnia and Herzegovina (SS Mostar) were divided in 1991 into UCTE’s first and second synchronous zone. Since 1995 CENTREL’s systems (in 2001 its members from the Czech Republic, Hungary, Poland and Slovakia became full members of UCTE) have been in synchronous work with the main part of UCTE, i.e. its first synchronous zone and since 1997 three countries from North Africa (Magreb) and since 2002 the westernmost part of Ukraine.

The second synchronous zone included: Macedonia, Greece, Serbia and Montenegro and a part of Bosnia and Herzegovina (with synchronous work with Albana) and in 2003 Bulgaria and Romania became full members of UCTE (in the second synchronous zone), which have been in synchronous operation with that part of UCTE since 1993.
Only at the beginning of this century, through the creation of political and security preconditions, could the real preparations for the achievement of business connection of UCTE zone begin.

In the Croatian energy system, which became marginal system of the main UCTE’s part (its first synchronous zone) after division, 400/110 KV SS Ernestinovo and its 400 kV transmission lines as well as SS 400/200/110 kV Konjsko were to be renovated and SS 400/220/110 KV Žerjavinec was to be constructed, together with its lines.

SS 400/220/110 kV Mostar and a big part of the 400 kV network were to be renovated as well as a lot of 220 kV of lines between Croatia and Bosnia and Herzegovina.
By fulfilling these preconditions, new connection of two divided UCTE’s zones was carried out on 10 October 2004, with the coordination of the whole process from HEP’s headquarters in Zagreb. In this way UCTE became a unique synchronous area again.

HEP d.d. became a supplier on the wholesale gas market

Unbundling of supply activity from HEP ODS (Distribution System Operator) through the foundation of the company HEP Elektra d.o.o. for electricity supply 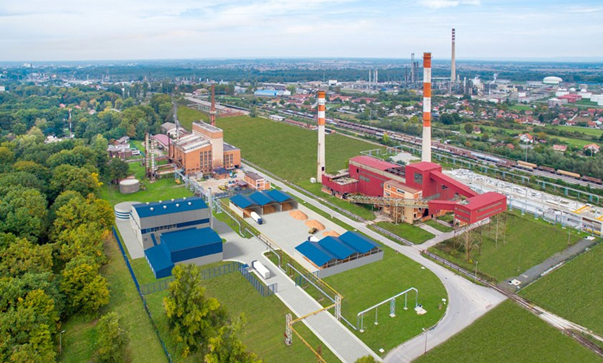 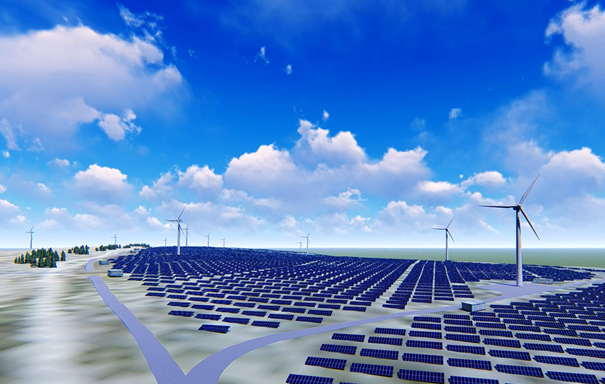 Takeover of SPP Cres project (6.5 MW) marked the start of HEP's cycle of investment into solar and wind power plants 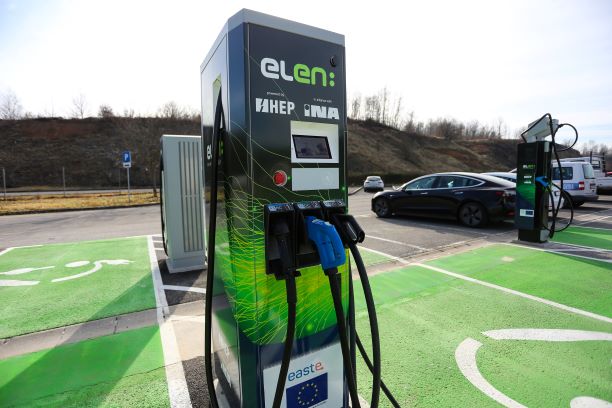 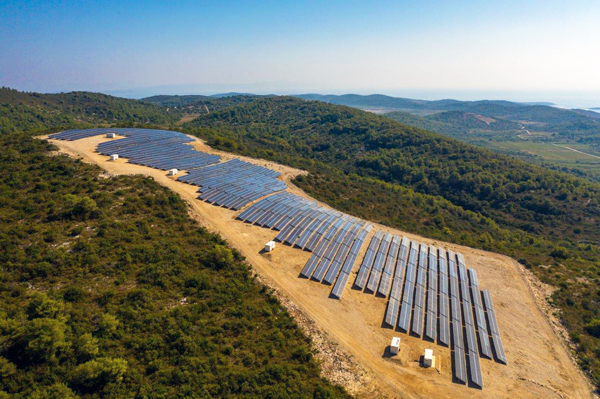 SPP Vis (3.5 MW) was put into operation, the biggest solar power plant in Croatia at that time