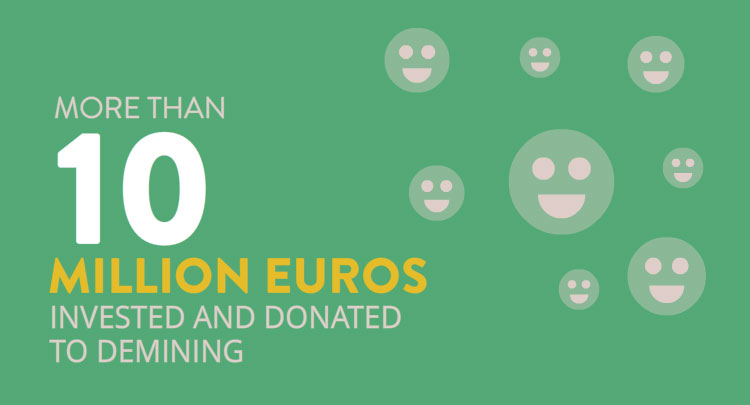 ZelEn is certified electricity obtained only from HEP’s renewable sources, and is offered to its customers by HEP Opskrba  (HEP Supply) as a unique product on the Croatian market. Money collected from selling ZelEn product represents means to be used exclusively for investing into projects of energy efficiency and renewable energy sources integrated into buildings, used by public sector institutions in the education, health and social care sectors.

So far, 11 projects worth a total of HRK 3.3 million have been implemented in four cycles. The projects were carried out at the Rijeka Branch of the Ivan Brlić Mažuranić Children's Home from Lovran, kindergartens Dugo Selo in Lukarišće, Sveti Ante in Prugov near Klis, Cvrčak from Solin, Morski konjić in Slatine and Osijek in Osijek,  Elementary Schools Fran Krsto Frankopan and Ljudevit Gaj in Osijek, Vocational high school in Varaždin, Catholic elementary school and Catholic high school with public law in Požega and Family Center in Požega.


At the beginning of war operations on the Croatian territory in 1991, the Republic of Croatia was faced with the problem of mines as one of the most serious consequences of war in these areas.

Mine contamination has a series of negative economic, developmental, ecological and social consequences and it represents a security issue in the areas which have been exposed to war. Big agricultural areas, forests, border areas, and parts of coasts and rivers are inaccessible today due to mining or suspicions of mining.

Many of HEP’s electric power objects (power plants, substations) and hundreds of kilometers of electric network were also exposed to mining. Therefore, HEP invested significant sums of money into demining its objects and network during and especially immediately after the Croatian War of Independence, which enabled the use of demined areas for other purposes, as well.

As a company which is familiar with the dangers represented by mines, HEP continued with its involvement in humanitarian demining. Since 2011, HEP has been the biggest individual donor to the Croatian Mine Action Center. Donations are used to carry out projects of demining, according to security priorities from the Demining plan of the Croatian government. In this way HEP contributes to the realization of one of the most important national projects, significant for the safety of population and economic development in the areas contaminated by mines.

Overall, in the last 18 years HEP invested and donated more than HRK 77 million into demining projects.


Student award (for physics and mathematics) was established in 1995 as part of the celebration of the Century of Hrvatska elektroprivreda. Since 2005, when the award was named IMAM ŽICU!, it has been given to the best young electro technicians.

The winners of HRK 3,000 of the prize money are all the students who win the first place at state competitions in mathematics and physics as well as the public presentation of papers in physics for the previous school year. In the area of mathematics, those are students from the 5th to the 8th grade of primary school and from all grades of secondary school, and in the area of physics, those are students from 7th and 8th grade of primary school and all grades of secondary school. The award is also given to students of technical schools who win the first three places on the state competitions in fundamentals of electrical engineering and in electrical measurements (the 1st and the 2nd grade) and on the competitions of the 3rd-grade students who are educated to become electrical mechanics (or electrical installers / electrical assemblers).

Since the establishment of the Award in 1995, HEP awarded 819 students with “IMAM ŽICU!”.

For the project of awarding students 20x IMAM(o) ŽICU! HEP got a grand prix of the Croatian Public Relation Association for the best communication project in the area of socially responsible business in the year 2014.

Inspired by bad conditions of the classrooms for computer science, in 2015 HEP started an action of buying new computers for primary schools.  In this way we offer the youngest students the opportunity to get a better computer science education, as well as the opportunity to create new knowledge and success. HEP has provided 450 computers to students in 130 elementary schools across Croatia over the past six years. The total value of donated IT equipment so far amounts to almost HRK 1.25 million.


The participants of the annual public tender may be registered associations, clubs and institutions with headquarters in Croatia. Projects from the following areas may apply for tender: the youth, art and cultural heritage, humanitarian work, science, society or environment. The decision on awarding donations is made on the basis of the assessment of project’s quality and authenticity, the level of its usefulness in the local or wider social community and effective and responsible donation management.