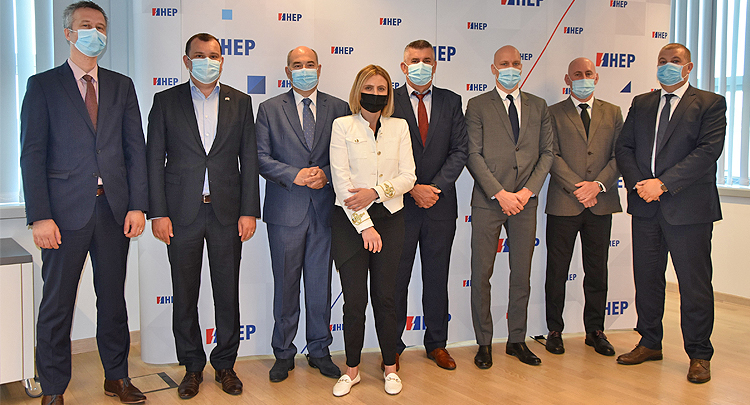 14.06.2021.
HEP Plin signed the Share Purchase Agreement with Darkom d.o.o. utility company from Daruvar for the purchase of business shares in Darkom Gas Distribution d.o.o., which secured the operation of 166 kilometres of the gas distribution network in Bjelovar-Bilogora County.

In the presence of the president of HEP Management Board Frane Barbarić and Daruvar Mayor Damir Lneniček, the HRK 3.5 m Share Purchase Agreement was signed at the HEP headquarters in Zagreb by Damir Pećušak, Director of HEP Plin and Ivana Djedović and Boro Karačić, the president and the member of the Management Board of Darkom d.o.o, a utility company in the ownership of five local self-government units from Bjelovar-Bilogora County: the town of Daruvar and the municipalities of Sirač, Đulovac, Končanica and Dežanovac.

The purchase of Darkom gas distribution has further strengthened HEP Plin's position as the largest distributor in Croatia by the length of the gas network in its ownership. Together with today's acquisition, HEP Plin will operate almost 4,600 kilometres of the gas network in Osijek-Baranja, Požega-Slavonia, Virovitica-Podravina, Vukovar-Srijem, Krapina-Zagorje and Bjelovar-Bilogora Counties and  supply more than 100,000 customers.

'Thanks to the active expansion policy on the Croatian gas market advocated and implemented by this Management Board, HEP Plin is today one of the most important entities on the gas market. The synergy of the overall gas business at the level of HEP Group and the strong financial position of HEP are a guarantee of safe and quality services provided to all our customers, including gas consumers in the Daruvar area ', said the president of HEP Management Board Frane Barbarić.

Darkom gas distribution operates in the southeastern part of Bjelovar-Bilogora County, has more than 6,000 users, of which 5,300 are households, and manages 166 kilometres of distribution network annually supplying about 12 million cubic meters of gas. After the signing of the purchase agreement, and until the merger by HEP Plin comes into effect, Darkom gas distribution continues to operate as an independent business entity, but within HEP Group, which has created conditions for the provision of even more secure gas supply to its customers.

The takeover of Darkom gas distribution is part of HEP Group's strategy focused on a further development of gas operations and an active participation in the consolidation process on the Croatian gas market. Thus, in 2018 the distribution network of the Municipality of Feričanci was taken over, followed by the acquisition of Plin Vtc gas distribution and supply company from Virovitica in 2019, PPD-Gas Distribution and PPD-Household Supply from Vukovar in 2020 as well as the Bizovac Municipality distribution network. In late March this year, HEP Plin crossed the borders of eastern Croatia for the first time by taking over Gradska plinara Krapina.

HEP Plin's long-term plans are focused on building a new and renovating the existing gas network as well as introducing new technologies, such as remote reading and smart gas meters, which creates the basis for strengthening competitiveness, a further increase in the number of customers, distributed gas volumes and service quality. HEP Plin has prepared well for the new phase of deregulation of the Croatian gas market as of 1 April, offering gas customers outside its distribution area the Hepi plin product, providing up to 13.2 percent lower gas prices to households.