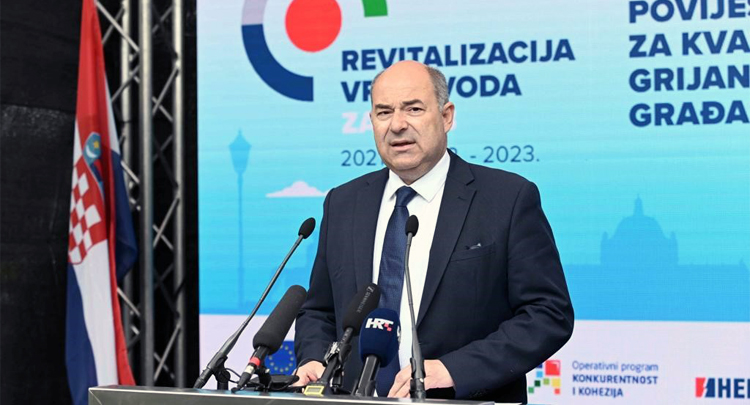 12.05.2021.
The Minister of Regional Development and EU Funds, Nataša Tramišak and the President of the Management Board of Hrvatska elektroprivreda, Frane Barbarić were present today at the start of the replacement of the existing hot water pipeline in Dugave, a neighbourhood in Novi Zagreb. These works mark the beginning of the biggest project in the history of the district heating system of the City of Zagreb; the revitalization of one third, 68.5 out of the total of 227.3 kilometres of Zagreb’s hot water network.

The total value of the project is HRK 700 million, HRK 421.5 million of which is financed through non-reimbursable grants from the European Regional Development Fund. So far, this is the largest sum allocated to HEP from the EU funds. HEP will invest the remaining sum necessary to realize the project from own funds.

“It is a fact that the trend of urban growth is exceptionally fast and currently even more than two thirds of European population lives in cities, making them the carriers of economic and social growth and development. The fulfilment of economic and social aims cannot be achieved without a targeted approach, which reflects the urban approach of cooperation with cities through ITU mechanism, as part of which this project is financed. HEP-Toplinarstvo is the biggest heat energy distributor in the Republic of Croatia, and this project is a part of its perennial revitalization of district heating network in Zagreb. Apart from immediate benefits for all citizens, this project will contribute to the reduction of heat losses and to the increase of supply reliability as well as the decrease of fuel consumption”, said Minister Nataša Tramišak.

“This project is of great importance for our fellow citizens, to whom we will ensure reliable supply of heat energy and hot water and increase the convenience of heating in their living and working spaces, along with a cleaner and healthier environment. All the stated benefits for Zagreb citizens will be realized owing to a strong synergy of Hrvatska elektropriveda, a state-owned company and the Croatian Government as well as competent national authorities, participating in the preparation of the project for co-financing from European Union funds. In order to ensure reliable supply in the long run, we are simultaneously conducting other two projects as part of the district heating system in Zagreb, with the total value of around one billion kuna – the construction of the new highly efficient gas block for the generation of electricity and heat energy and the heat energy accumulator at the EL-TO Zagreb site in Zagorska street. We are investing HRK 90 million in smart grids in the power distribution system in Zagreb area. Currently 248 transformers are being replaced and 10,000 smart meters are being installed to our end customers. As in the case of hot water pipeline revitalization, we were also allocated grants from the European funds for that project. In the last three years HEP Group withdrew the total of almost a billion kuna from the European funds”, said Frane Barbarić.

Most of the existing hot water network of Zagreb’s district heating system was constructed using the technology of laying steel pipes in a concrete trench, which is out of date today. Hot water pipes laid in this way are subject to external influences, such as a high level of underground waters and a possible pipe leakage and penetration of rainwater into concrete trenches, which causes pipe damage and corrosion formation, leading to increased heat losses, pipe bursts and interruptions of heat energy supply. The project of hot water network revitalization will use modern technology of trenchless pre-insulated pipes, which will increase the reliability and safety of Zagreb’s central heating system.

The project will enable the reduction of heat losses by around 28 percent, process water refill losses by around 47 percent and the number of emergency interventions at revitalized parts of the pipeline by 90 percent. Furthermore, the reduction of heat losses will result in a reduced need to generate heat energy and consequently in lowering the emission of contaminating substances in the environment. It is estimated that in 2025 CO2 emission will be cut by 11,104 tons when compared to pre-revitalization level.

Works on the revitalization of hot water network will cause temporary interruptions of heat energy supply and temporary traffic regulation. Citizens can find all the information about it on the official website of the project, which is going to be regularly updated. We kindly ask the citizens for patience and understanding, since they will get safer heat energy supply when the works are over.

Video from the event is available on YouTube channel of Hrvatska elektroprivreda. 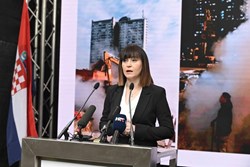 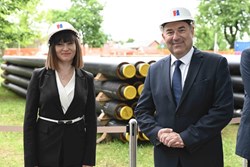 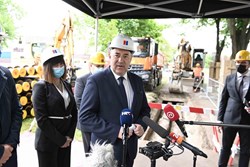