02.07.2020.
Hrvatska elektroprivreda published a public call today to all interested partners for expression of interest in development and sale of renewable energy sources projects in the Republic of Croatia. On the basis of 2019 public call results, HEP signed agreements with 11 local government units on the development of solar power plant projects with the total power of 120 MW.

The new public call to interested partners  is open by 31 December 2020. The call is made to local government units for the purpose of mutual preparation of development documentation for solar power plant projects (SPP) and to legal and natural persons interested to sell the projects of unintegrated (stand-alone) solar power plants developing power of 2 MW or more, wind farms and hydropower plants in development or in operation, with the power of 1 MW or more.

“I would like to congratulate HEP on its vision and proactive politics shown by its cooperation with local government units, when realizing these projects. The compatibility of HEP’s strategy and the Croatian government is an indicator of HEP deserving to be the company which is going to carry the transition of Croatia to low-carbon economy. I hope this example of good practice will serve private investors as a guide towards the direction we shall take”, said Tomislav Čorić, the envoy of the Prime Minister of the Croatian government, and the Minister of Environment and Energy.


HEP decided to publish this public call following good experience with the response to the 2019 call. HEP signed agreements with 11 municipalities and towns on the development of solar power plant projects with the total power of 120 MW, in the period between September 2019 and April 2020, based on the analysis of received expressions of interest and communication with local government units as potential partners. HEP ensured additional 60 megawatts on the basis of the call through contracted acquisitions of projects in development, whereas 100 megawatts is the potential total power of solar power plants, which HEP began to develop independently in several other locations.

According to signed agreements, a part of local government units is preparing project documentation until they obtain the location permit. These are the following municipalities: Kršan, Lipovljani, Sućuraj and Viljevo as well as the Town of Mali Lošinj. Other local government units are preparing project documentation until they obtain the construction permit; these units being the towns of Lipik, Novska, Križevci and Ludbreg as well as municipalities Bedekovčina and Marijanci.

“Cooperation with the local community helps us hasten the realization of our renewable scenario of development. However, municipalities and towns have a chance for stronger engagement on the development of sustainable energy infrastructure in their areas, which is going to contribute to their economic and overall development. In HEP, we understand our role of one of the biggest investors in Croatia and drivers of economy. Therefore, without hesitation we continued with the realization of our investment plan and the investments which are strongly characterized by the national component. HEP Group’s investment cycle has not been stopped or slowed down, but our 2020 investment plan has been set at the biggest amount in the history of Hrvatska elektroprivreda, totalling at HRK 4.9 billion.  Even last year, with HRK 3.4 billion, our investment rose by more than 40 percent at the annual level, and even more ambitious objectives have been set by this year’s plan. We are going to continue the investment cycle with the same intensity, planned investment between 2021 and 2024 amounting to HRK 14.5 billion. Currently, we are constructing hydropower system Kosinj/Senj2, the biggest project of HEP in independent Croatia, worth HRK 3.4 billion, a new highly effective unit in Combined Heat and Power Plant Zagreb, in which we are investing HRK 900 million, Korlat windfarm worth HRK 500 million and six solar power plants. Our plan by 2030 is to have new 1,500 megawatts in generation capacities, 350 megawatts of which in windfarms, and the same amount in solar power plants”, said Frane Barbarić, the President of the Management Board of Hrvatska elektroprivreda.

HEP is going to invest HRK 750 million in the construction of solar power plants between 2019 and 2023. These and other HEP’s newly constructed power plants are going to help with fulfilling Croatian obligations when implementing ambitious energetic and climatic EU objectives, which have recently got their framework in form of the European Green Deal. For financing its renewable scenario of development HEP is using European funds, so in the last three years it withdrew around a billion kuna from EU funds.

Video from the presentation is on YouTube channel of Hrvatska elektroprivreda. 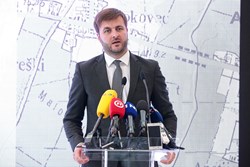 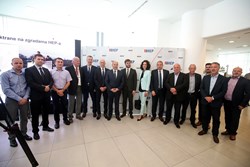