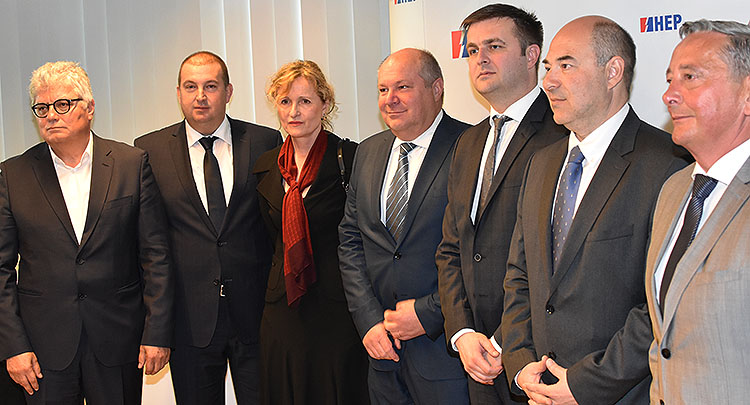 08.04.2019.
Solar power plants Kaštelir, Cres, Vis and Vrlika Jug, of the total capacity of 11.6 MW and the value of HRK 80 million are the first four solar power plants in a big investment cycle, during which Hrvatska elektroprivreda will invest HRK 750 million by 2023, announced the representatives of HEP at the media presentation of the project Solar power plants – Energy of nature.

The Purchase Agreement for the solar power plant Sabadin (future SPP Kaštelir) was signed at the event by Marino Roce, the director of Plomin Holding, a member of HEP Group, and on behalf of the co-owner of the company Elektrane Sabadin, Stjepan Talan from the company Solvis and Rajka Matković. The Construction Contract for the solar power plant Cres was signed by Frane Barbarić, the president of the Management Board of Hrvatska elektroprivreda d.d. and Nebojša Dulić, the president of the company PVI Solar, on behalf of bidders – the companies: PVI Solar, PVI GmbH, Intecco and Deling.

The construction of solar power plant Vis will start this month. This project was taken over by HEP in December 2018 from the company Končar OIE, and HEP Proizvodnja will construct the solar power plant Vrlika Jug in the second half of 2019. Integrated solar power plants’ projects on the HEP- owned buildings  were also presented. Their total capacity is 2.1 MW and their value amounts to HRK 13 million.

"Croatian potential in renewable energy sources, especially solar power, is significant and I believe that through its investments by 2030 and in synergy with the Croatian industry, Hrvatska elektroprivreda will be the crucial stakeholder in bringing the new national strategy of energy development to life", said Tomislav Ćorić, PhD., the Minister of environment.

"HEP started the cycle of constructing solar power plants as a part of the renewable scenario of development in line with the postulates of the future Croatian energy strategy and EU guidelines of energy and climate policy. By 2030 we are planning to realize the projects of solar power plants with the total power capacity of 350 MW. In the forthcoming five-year period  the average of HEP’s investments into solar power plants will amount to HRK 150 million per year, meaning HRK 750 million by the end of 2023, which on average enables the construction of additional 20 MW ofsolar capacities annually", said Frane Barbarić, the President of the Management Board of Hrvatska elektroprivreda d.d..

The power plants Vrlika Jug, Cres and Vis will generate electricity without having a Power Purchase Agreement with the Croatian Energy Market Operator regarding power purchase at an incentive price. Solar power plants on the islands of Cres and Vis will contribute to the strengthening of infrastructure, for the purpose of tourism development, since the electricity generation will be the highest when needed most i.e. in the periods of increased consumption during the tourist season. All four power plant projects were prepared through cooperation of HEP and its partners – local and regional government units and companies.