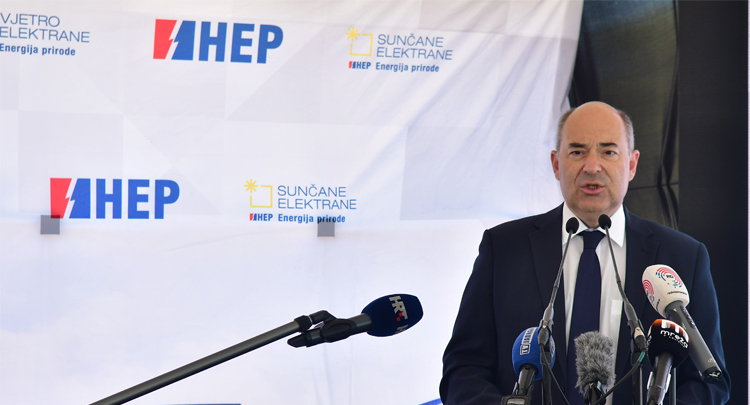 11.09.2020.
The envoy of the Prime Minister of the Republic of Croatia Ivo Milatić, State Secretary in the Ministry of Economy and Sustainable Development and the President of the Management Board of Hrvatska elektroprivreda Frane Barbarić put today into operation Solar Power Plant Vis, the largest solar power plant in Croatia worth 31 million kuna.

3.5 MW SPP Vis is first of seven HEP's solar power plants to be put into operation during this year as part of the HRK 750 m worth solar power plant construction cycle in the period between 2019-2023.

The construction of this solar power plant provided the island of Vis with its own source of renewable energy and a higher security of electricity supply, in particular in times of increased demand during tourist seasons.
"Putting the largest solar power plant in Croatia into operation is a historical day for the island of Vis and the start of future developments in Croatia in the next 10 years. The Croatian Government began with the implementation of the new energy policy of Croatia and the European Union, focused on green energy investments, very strongly back in 2017.  This power plant is the best example of said investment. On behalf of the Croatian Government I would like to congratulate HEP and Končar on delivering such a valuable investment for Croatian power generation and the economy", said State Secretary Ivo Milatić, envoy of the PM of the Republic of Croatia.

SPP Vis is the first large solar power plant constructed on Croatian islands. This 3.5 MW plant will produce, incentive-free and fully market-based, about 5 million kWh of electricity, which corresponds to electricity consumption of about 1,600 households. It is located on the area of 5.5 ha, on the Griževa glavica hill, near the place Žena glava, 3.6 kilometres southwest of the town of Vis and 4.8 kilometres east of the town of Komiža.

'Solar Power Plant Vis, along with a number of other projects undergoing construction, proves that HEP today does not only speak of plans and promises but of real projects which are being carried out. The implementation of all investment projects, of which only this year we expect a record-high realization exceeding 4 billion kuna, in particular of projects with a high share of domestic participation, strongly contributes to the development and stability of Croatian economy. We are focusing on projects which aim at increasing the quality of life on the islands', said Frane Barbarić, the President of the Management Board of Hrvatska elektroprivreda d.d.

'The result of a joint effort of HEP and KONČAR on the way to energy autonomy and self-sufficiency of Croatian islands is the construction of modern projects such as the first non-integrated solar power plant erected here on Vis. I would like to emphasize that KONČAR secured a direct connection of this plant on the distribution network thanks to the development of CON SOL converters thus decreasing the energy transformation losses. I hope that KONČAR will continue to work closely together with HEP in its announced investments of harvesting sun energy by supplying converters and power plant operation and supervision systems', said Gordan Kolak, Chairman of the Management Board of KONČAR – Electrical Industry Inc.

The 1 MW battery tank with capacity of 1.44 MW, first of its size in Croatia, will be installed next to SPP Vis. This battery tank will be used for providing the balancing services of the electric power system and for maintaining the network stability on the island. By constructing solar power plants and accompanying battery tanks, by strengthening electric power network including the replacement and construction of undersea cables, and by installing EV charging stations, HEP increases the security of supply and facilitates the achievement of a high level of energy self-sufficiency of Croatian islands in line with the highest environmental standards.

HEP annually invests an average of one million kuna in improvements of the electric power infrastructure on the island of Vis. In the following three years, the company will invest as much as 30 million kuna in a number of projects including the laying of undersea cables Hvar-Pakleni otoci–Vis and Vis-Biševo, as well as the laying of 20 kW cable lines Ravno Stupišće and Smokova. The works on the installation of the first ELEN EV charging station on the island have also commenced in the town of Vis, which will be followed by the EV charging station in Komiža.

'Thanks to Solar Power Plant Vis and other solar power plant projects in construction such as SPP Vrlika and projects in development including Bogomolje power plant on Hvar and others, Split-Dalmatia County will remain a forerunner in renewable energy sources in Croatia. I am glad that our beautiful island of Vis, thanks to the solar power plant, is on the right track of becoming energy self-sufficient', said Blaženko Boban, Split-Dalmatia County Prefect.

You can watch the video from the ceremony on YouTube Channel of Hrvatska elektroprivreda. 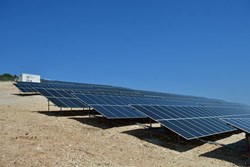 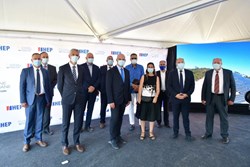 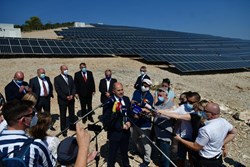 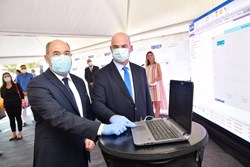 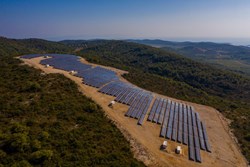