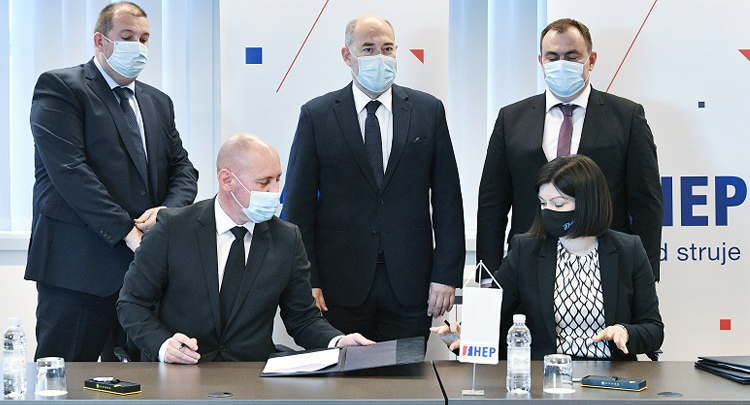 31.03.2021.
HEP Plin signed a Share Purchase Agreement with the company Krakom d.o.o. for shares in the company Gradska plinara Krapina d.o.o., by which it obtained ownership of 457 kilometers of gas distribution network in Krapina-Zagorje County.

In the presence of the President of HEP’s Management Board, Frane Barbarić and the Mayor of Krapina, Zoran Gregurović, Share Purchase Agreement was signed by Damir Pećušak, the director of HEP Plin and Katarina Posilović, the director of Krakom d.o.o., a municipal service company owned by five local government units in Krapina-Zagorje County: the Town of Krapina, and municipalities Đurmanec, Jesenje, Petrovsko and Radoboj. The purchase of Gradska plinara Krapina proved HEP Plin to be the biggest distributer in Croatia, according to the length of gas network in its ownership. Including this acquisition, HEP Plin will manage the total of 4,419 kilometers of gas network in the following counties: Osijek-Baranja, Požega-Slavonia, Virovitica-Podravina, Vukovar-Srijem and Krapina-Zagorje. The network supplies more than 100,000 users.

“This acquisition confirms active policy of expansion on the Croatian gas market, which has been advocated and implemented by the Management Board of Hrvatska elektroprivreda. This is the first time HEP Plin went beyond the regional framework of eastern Croatia, where it manages a unique gas network in four counties. This presents a new challenge for the business of HEP Plin, the company with almost fifty years of experience and tradition. I am confident it will respond to this challenge successfully, at the satisfaction of all gas network users in a part of Krapina County, where Gradska plinara Krapina does business. Owing to the synergy of gas business on HEP Group’s level and a strong financial position of Hrvatska elektroprivreda, we are able to guarantee a safe, stable and good service of gas distribution to all gas users, citizens and companies”, said Frane Barbarić, the President of HEP’s Management Board.

Gradska plinara Krapina works in the area of Krapina-Zagorje County, and it has 5,500 users, 5,000 of which from household category. It manages 457 kilometers of distribution network, through which it annually delivers an average of 70 GWh of gas. After signing this Share Purchase Agreement, and before merging with HEP Plin, Gradska plinara Krapina will continue to act as an independent economic operator, but within HEP Group. For users this will create preconditions of even safer and more favourable gas supply at the market. The takeover of Gradska plinara Krapina is a part of HEP Group’s strategy, which is directed towards further development of gas business and active participation in the process of consolidation at the Croatian gas market. Thus, in 2018 the distribution network of Feričanci municipality was taken over, in 2019 the company for gas distribution and supply Plin Vtc from the town of Virovitica, and in 2020 the companies PPD – Gas Distribution and PPD – Household Supply in the town of Vukovar as well as the distribution network of Bizovac municipality.

HEP Plin’s long-term plans are directed towards the construction of additional gas network and introduction of new technologies, such as remote reading and “smart” gas meters, which ensures the foundations for strengthening competitiveness, for further increase of customer number and the amount of distributed gas as well as the increase of service quality.