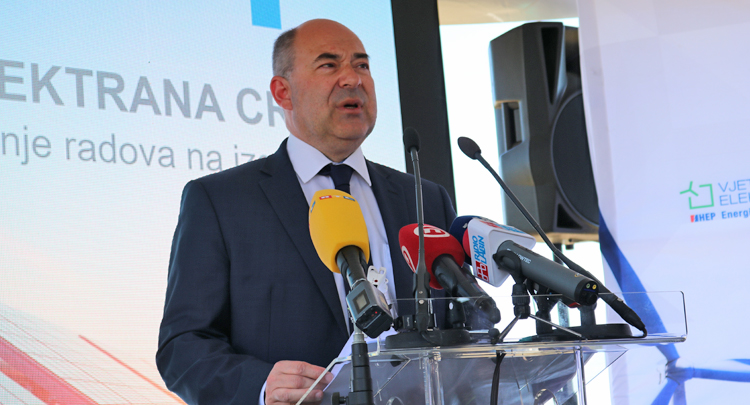 Works at the construction of SPP Cres, the biggest solar power plant in Croatia, open

23.06.2020.
The Minister of the Sea, Transport and Infrastructure, Oleg Butković, the Minister of tourism, Gari Cappelli and the President of the Management Board of Hrvatska Elektroprivreda, Frane Barbarić laid the foundation stone today for the construction of solar power plant Cres, the biggest solar power plant under construction in Croatia, worth HRK 41 m. They also visited ELEN electric vehicle charging station on the island of Cres.

"The development of infrastructure of this kind, which also follows ecological dimension and acceptability is of utter importance for tourism, since it is impossible to develop good tourism directed towards sustainable development, without such high-quality infrastructure”, said Gari Cappelli, the Minister of Tourism and the representative of the Prime Minister, Andrej Plenković at today’s event.

Solar power plant Cres will contribute to the strengthening of electricity supply security and to the increase of energy self-sufficiency level of the islands of Cres and Lošinj, particularly in the periods of increased power consumption during tourist seasons.
“I would like to congratulate to everyone who participated in the preparation of this project, HEP, Primorsko-goranska County, the Town of Cres and relevant ministries. This commendable investment will contribute to energy independency and development of the island of Cres. The synergy of investment in energy industry and transport is of crucial importance for keeping the population on our islands, but also for the stability of Croatian economy in the crisis caused by the coronavirus”, said Oleg Butković, the Minister of the Sea, Transport and Infrastructure.

This 6.5-MW power plant will annually generate around 8.5 million kWh of electricity, which corresponds to the power consumption of about 2,500 households. It is being constructed on the land covering the area of 17 ha, two kilometres north from the place Orlec. The total of 20,330 panels of the national producer, Solvis will be installed in 13 segments, each with individual power of 500 kW. The panels will be set in such a way that they make it possible for small animals to pass safely and for sheep to graze within the fence of the solar power plant. Until the location permit was obtained, the project of SPP Cres was developed by Primorsko-goranska County, when it was taken over by HEP, which entrusted the construction to the consortium PVI Solar, PVI GmbH, Intecco and Deling, upon tender. The generation in the solar power plant will start by the end of the year.

“Despite the global crisis caused by the coronavirus, HEP continued without hesitation with the realization of its 2020 investment plan, which was set at the biggest amount in the history of HEP, totalling at around HRK 5 billion. We are doing this since we are aware of the fact that continuing our investment cycle, which is strongly characterized by the national component, is extremely important for the development and stability of the Croatian economy. Thereby the largest proportion of investment refers to the realization of the renewable scenario of HEP’s development by 2030, within which we are planning to build 1,500 MW of generation capacities. A half of these capacities, which correspond to nuclear power plant Krško in power, will be in form of solar power plants and wind farms. Currently, Korlat wind farm and seven solar power plants are either under construction or awaiting the commencement of construction”, said Frane Barbarić, the President of the Management Board of Hrvatska elektroprivreda.

You can watch the video from the ceremony of opening construction works on YouTube channel of Hrvatska elektroprivreda.