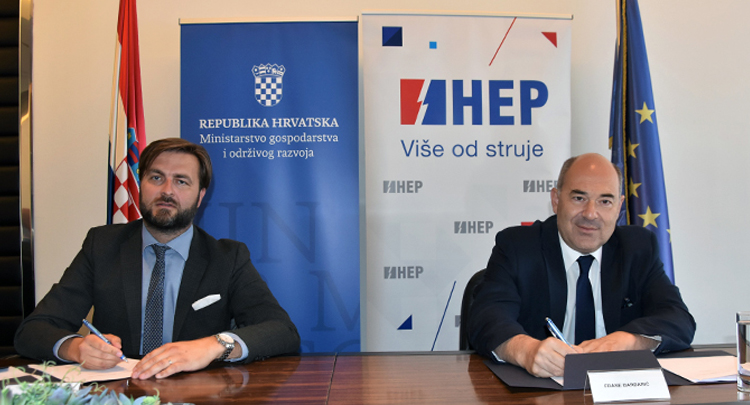 12.07.2021.
The Ministry of Economy and Sustainable Development and Hrvatska elektroprivreda d.d. signed today in Zagreb the Agreement on Preparation and Implementation of Kosinj hydropower system (HES Kosinj). The Agreement was signed by Minister Tomislav Ćorić and the president of HEP Management Board Frane Barbarić.

Said Agreement represents the basis on which the Croatian Government will make a decision on declaring the HES Kosinj project of strategic interest for Croatia in line with the Croatia's Act on Strategic Investment Projects.

'I can say with certainty that today is a great day for the Croatian energy sector as one of the largest investments in the recent history of Hrvatska elektroprivreda will soon become a strategic project. The true complexity of this project is seen in its overall outcome which will contribute to achieving several national goals - increasing the share of electricity production from renewable sources, resolving flooding issues and building much-needed energy infrastructure. Given the plan to create a decarbonized Europe in accordance with the guidelines of the European Green Plan, this is another proof that Croatia is thinking and moving towards green, ie renewable', said Minister Ćorić.

The HES Kosinj project includes the construction of the Kosinj Reservoir with Kosinj, Sedlo and Bakovac dams, injection curtains and Kosinj hydropower plant with support facilities, the reconstruction of existing Sklope hydropower plant, the construction of alternative roads and of the power network connection via the 110 kV switchyard and 2 x 110 kV overhead lines and of the 10(20) kV electricity distribution network connection. The project value is 1.54 billion kuna. The construction of the Kosinj Reservoir is expected to increase the degree of water usage from the Lika and Gacka rivers for electricity production by reducing overflow losses, thus achieving a high degree of flood protection in the downstream area, Lipovo polje and the Kosinj valley, which are flooded almost every year.

'As one of the two units in the overall project of upgrading the existing Senj hydropower system (HES Senj), HES Kosinj will enable an increase in electricity production at HES Senj by 230 GWh or by 22 percent compared to current production. Together with the second part of the project, Senj 2 hydropower plant, this is the largest project by HEP since the independence of Croatia, with a total value of 3.4 billion kuna. The agreement we signed today confirms that this is an extremely important project for HEP and for Croatia. Obtaining the status of a strategic project is a great recognition, but also an obligation that we will successfully fulfill in cooperation with the competent authorities', said Frane Barbarić.

In addition to increasing total electricity production, which will contribute to the strengthening of Croatia's energy self-sufficiency, the project will increase the share of renewable sources in meeting electricity demand in Croatia. It will also bring a series of commercial benefits at the national and local levels, particularly to GDP growth, the possibility of engaging the local construction industry as well as increasing employment of the local population in tourism and other service industries during and after construction, and of creating better conditions for agricultural production. 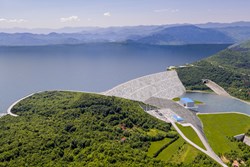