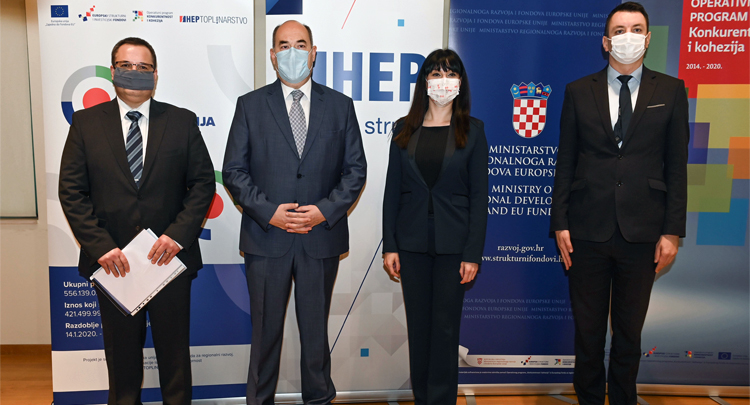 19.11.2020.
HEP Toplinarstvo will finance the project of revitalization of 69.5 kilometres of hot water network in the City of Zagreb with the help of European Union funds. The total value of the project is HRK 700 million, presenting eligible costs of the project amounting to HRK 556.1 million excluding VAT. Of that amount, HRK 421.5 million is a grant from the European Regional Development Fund, while Hrvatska elektroprivreda will invest HRK 134.6 million from own means into Project implementation. So far, it is the biggest amount allocated to Hrvatska elektroprivreda from European Union Funds.

Grant agreement on the grants awarded under the Operational Program "Competitiveness and Cohesion 2014 – 2020", specific goal 4d3 was signed by Nataša Tramišak, the Minister of Regional Development and European Union Funds, Tomislav Petrić, the Director of the Central Finance and Contracting Agency (SAFU) and Zdravko Zajec, the Director of HEP Toplinarstvo.  The Secretary of State of the Ministry of Economy and Sustainable Development, Mile Horvat and the Head of the European Union Programs and Project Office of the City of Zagreb, Mirjana Zubak were also present at the agreement award ceremony.

“This project of the City of Zagreb’s hot water network revitalization is the 14th big capital strategic project of the Republic of Croatia signed in the program period between 2014 and 2020. By awarding this agreement we have signed the total of more than HRK 16 billion of big strategic projects, and all of these projects are being implemented by 2023. There is another significant agreement to sign, referring to the construction of broadband infrastructure aggregation network, which is going to be signed in the following three weeks. The last agreement will bring us to HRK 17 billion of contracted big projects. When we speak of this project, the deterioration of hot water network in the City of Zagreb is the reason of big urbanization as well, and solving basic communal problems in the cities lies right in the source of financing from European Structural and Investment Funds. In the following program period, between 2021 and 2027, within given parameters and guidelines for greener Europe, we will certainly support the development of such projects. Upon completing this project worth around HRK 700 million, HRK 421.5 million of which is a grant, 68.5 kilometres of hot water network will be revitalized, and most importantly the supply to 100,000 households in Zagreb will improve”, said the Minister of Regional Development and European Union Funds, Nataša Tramišak.

The project is implemented through the mechanism of integrated territorial investments (ITI) in the Zagreb Urban Agglomeration, so as to achieve a defined specific objective – the increase of district heating system effectiveness. The works on the revitalization of the City of Zagreb’s hot water network, which supplies more than 100,000 customers, will be conducted during the period of three years, through several phases, and they will encompass the exchange of almost a third of the existing hot water network, meaning 68.5 kilometres of the total of 227.3 kilometres. The works will be conducted in the periods out of heating seasons of 2021, 2022 and 2023 in the following neighbourhoods: Dugave, Utrina, Travno, Središće, Sopot, Siget, Trnsko, Volovčica, Borovje, Folnegovićevo, Savica, Kruge, Martinovka, Sigečica, Vrbik, Cvjetno, Donji grad, Trešnjevka, Voltino, Rudeš, Srednjaci, Gredice, Gajevo, Staglišće, Jarun, Vrbani and Malešnica.

“This is an extremely important project which will ensure reliable and continuous heat energy supply to the citizens of Zagreb. This is the biggest HEP’s project so far and it is currently one of the biggest projects in Croatia, co-financed from European funds. Taking into account today’s agreement, HEP Group has withdrawn almost a billion kuna of financial means from Europe in the last three years. A highly efficient facility for generation of electricity and heat energy, which will be put into operation in 2022 will contribute to a better heating service in Zagreb”, said Frane Barbarić, the President of the Management Board of Hrvatska elektroprivreda d.d.

More than a half of the existing hot water network of the City of Zagreb’s central heating system was constructed between 1962 and 1995, using what is now considered obsolete technology of classical steel pipe laying into a concrete open trench. The high water pipes laid in such a way are subject to external influences, such as a high level of groundwater, possible pipe leakage and penetration of rain water, which can cause the deterioration of hot water pipes and the formation of corrosion leading to increased heat losses, a higher number of pipe ruptures and the interruption in heat energy supply.

Through this project, hot water network will be revitalized by modern technology of trenchless pre-insulated pipe laying, which will increase the reliability and safety of the City of Zagreb’s central heating system.

“The project will be implemented by 31 December 2023. This is our 15th ITI program of the City of Zagreb, the contracting of which has been completed. Thank you for the cooperation so far, and SAFU will continue to be our partner in the following years and in the new program period. I am looking forward to a successful realization of this project”, said Tomislav Petrić, the Director of the Central Finance and Contracting Agency (SAFU).

Works on the revitalization of hot water network will cause temporary interruptions in heat energy supply and temporary traffic regulation. Hot water supply interruptions will be planned, so as to last as short as possible, and the citizens will be informed continuously and on time about all the works and interruptions. 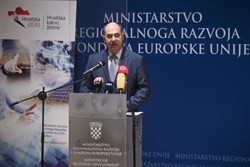 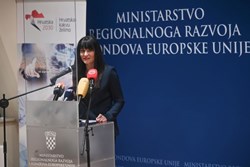 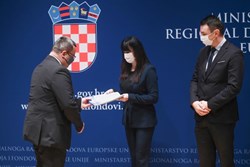 When performing its activities, HEP -Toplinarstvo collects and processes personal data respecting all the relevant laws and bylaws of the Republic of Croatia and the EU. It protects your privacy and treats your personal data with special attention. More

HEP-Toplinarstvo uses cookies to provide better user experience. By continuing to use the web site or clicking the button “OK“, you agree to our use of cookies. Find out more